It does not matter how long I have lived in Berlin, how many new experiences I collect or new places open which grab my attention for a night or an afternoon or more, we always return to the Prater. The beer garden is at the top of the hill, I tell our guests who are usually staying at The Circus on Rosenthaler Platz, down at the bottom. We can walk there, after work or school, for a beer and a sausage under the chestnut trees, and although we no longer walk home it is not far, by tram or bike, to Wedding and so it has remained a fixture of our spring and summer months even after we moved out and away from the neighbourhood.

The Prater – restaurant, theatre and beer garden – is not only a fixture of my Berlin, but of the city in general. People began drinking here in 1837, back when the city limits were down at Rosenthaler Platz and the Prater was a day trip into the countryside, a place of escape and refuge from the city. Berlin would break out over the next seventy years, swallowing the beer garden and surrounding it with streets and buildings, but it would remain not only a place of leisure and Sundays free from cares and worries but also, reflecting its position in the heart of the new working class districts providing the labour for Berlin’s rapid industrialisation, a place of political gatherings and agitation as well.

In the 1860s the founding of the first German labour party, the German Worker’s Association, was celebrated in the Prater, and after Bismarck unified Germany and then, in the 1890s, banned political gatherings in order to solidify his control, the beer gardens such as Prater became good cover for meetings and gatherings. By the beginning of the 20th Century the Prater had become the centre point for May Day celebrations in the neighbourhood, which would survive through to the interwar years.

The Nazis clamped down hard on political gatherings that were not to their taste, and war brought closure to the beer garden just after it celebrated its hundredth anniversary. But the bombs that fell on Berlin over the next six years would somehow spare the Prater, and by summer 1945 it was open again, playing host to the Volksbühne theatre, whose home on Rosa-Luxemburg-Platz was being rebuilt. During the years of the Berlin division, the Prater was in the East of the city, and was used by the ruling party for conferences, youth gatherings, and film screenings for DEFA, the East German film studio. In the 1960s the Prater was declared a cultural institution, giving not only the beer garden and its stages a special status, but also its employees.

After the fall of the Berlin Wall a period of creativity that mirrored what else was happening in Prenzlauer Berg and Mitte in the early 1990s gave way to confusion and problems within the management of the venue, before the Volksbühne returned to develop its second performance space and reinvigorate the Prater as a whole with a re-opening in 1996. Alongside the theatre space the restaurant was developed to become a year-round proposition, but ultimately it remains the beer garden that draws people back, and draws me back, summer after summer. It is surrounded by buildings and it is almost entirely paved, but there is something about this space, the half-light of the sun trying to breach the thick-leaved branches of the trees, the sound of chatter of hundreds of happy drinkers and their dusty-faced kids playing the sand pit, and the sense of familiarity that comes with an institution that knows its place and its role, and has done for nearly two hundred years.

You can read more of the story of the Prater beer garden, in English and in German, on the website. 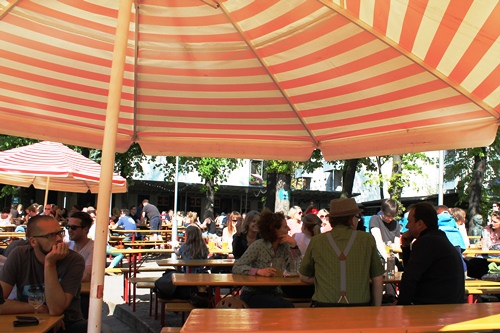 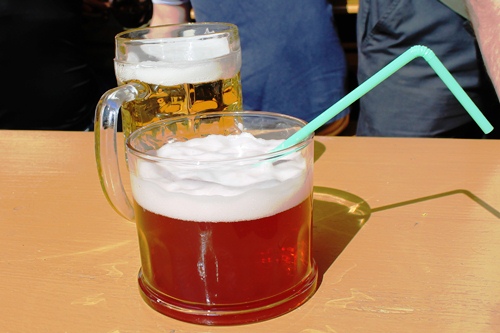 2 thoughts on “At the Prater Beer Garden, Berlin”