On a fine autumn morning I was invited to join a tour exploring the architecture of “divided Berlin”, starting with the wonderfully grand and only slightly-preposterous stretch of Karl Marx Allee that was built as a showcase to the wonders of the newly-established and socialist German Democratic Republic back in the early 1950s. A few days later, when the boulevard was once again bathed in autumnal sunshine, we returned for a stroll and to capture its glories on camera.

The original plans for the area of Berlin east of Alexanderplatz that had been badly destroyed by bombing raids and street fighting during World War II were to develop small clusters of communities around communal spaces, much like garden cities or the modernist housing estates of the interwar period, such as Bruno Taut’s Horseshoe Estate which has been covered on the pages before. Indeed, plans were so advanced that the first buildings were erected, before the priorities changed. It was felt that the Stalinallee – as it was known up to the point Uncle Joe found himself denounced and his statue and name removed all across the communist bloc – needed to be more representative of the regime that was building it, that the glories of socialism needed to be celebrated, and that palaces for the people were what was required.

And that, along with the first major demonstration against the regime that began with the Stalinallee construction workers in 1953, was what they got. Later, as money was tight and new developments in pre-fabricated tower blocks allowed for quicker and simpler construction, the stretch closest to Alexanderplatz was completed in a more understated style, but between the Strausberger Platz and the Frankfurter Tor you can enjoy walking along the ideology-made-concrete grandeur of what Stalin and his German buddies had decided was to be the living quarters of the global revolution.

It remains wonderful to walk the Karl-Marx-Allee, trying to imagine the street at the time of its unveiling. We pressed our noses to the windows of the old Karl Marx bookshop, where despite the fact it now houses offices for a small publishers and a film production company, the old neon sign and the bookshelves themselves remain in place thanks to a protection order. At Strausberger Platz you can look across the fountain and up the street, and try to picture Lenin looking back at you from his vantage point in front of the tower blocks on the square that bore his name. That square is now named for the United Nations, and Lenin is no more – his statue buried somewhere in the Brandenburg countryside – but as with all across the city it is not so much what is gone that grabs you, but the echoes of the past in what remains. 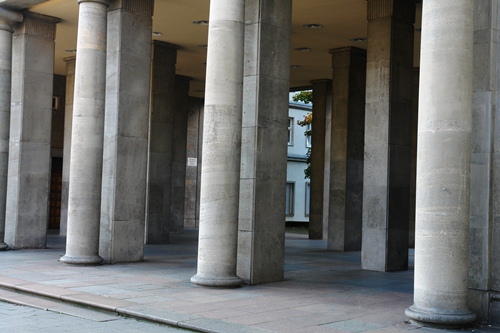 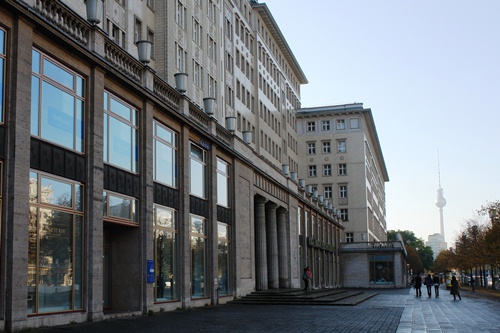 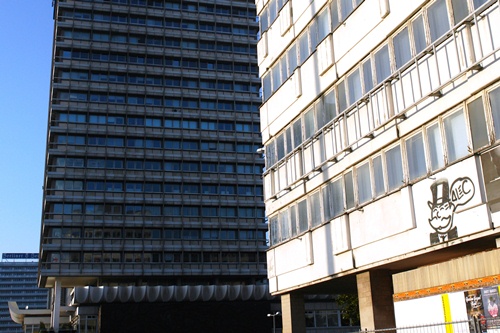